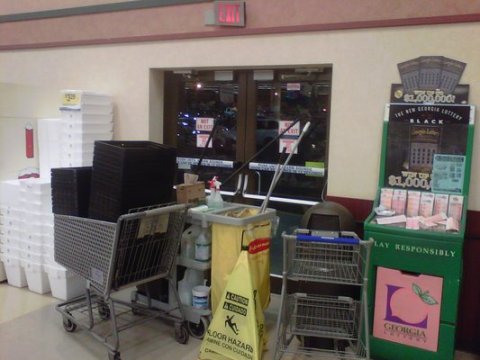 When people think of a firefighter, they picture him/her fighting a blazing house fire for hours upon hours while saving lives in the process, which is party true.

The job of a firefighter is to “save lives and protect property” but, what the eye of the public doesn’t see is what goes on behind the scenes when there are no emergencies that need attended to.

When firefighters aren’t fighting fires, they are doing everything in their power to possibly prevent them from happening. The Fire Inspection Program that the El Dorado Fire Department conducts is a preventive measure that the department takes to keep our local businesses safe. The image depicts an example of a blocked fire exit which is in violation to Section 1003.3 of the International Fire Code 2006 version.

Every calendar year, the El Dorado Fire Department conducts 714 fire inspections ranging from businesses to home child day cares. Residential homes are not inspected unless they are a day care. Each inspection begins with obtaining permission to inspect the property.

While inspecting the property, the firefighters will look for numerous fire code violations (extensions cords, blocked exits, etc) which can be referenced by viewing the International Fire Code 2006 version. After the inspection is completed, the firefighter will email a copy of the inspection with any violations noted and the approximate date that he/she will return to recheck the violation. Once everything is complete, the property will not need to be inspected again until the next calendar year. 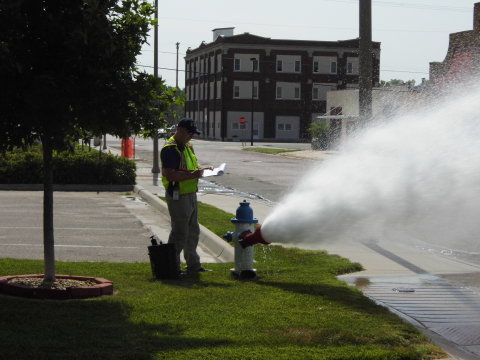 Another preventive measure that the Fire Department does is that they conduct yearly tests of every single fire hydrant in their district. Starting in the spring, you will see the firefighters out on the town testing the hydrants.

When testing the hydrant, they are checking for the pressure and how much water each hydrant will flow at any given time. While testing, the firefighters will also clean and lubricate each hydrant to keep it functioning well so that in a time of need, there will not be any unnecessary delays. We ask the public to please not drive through the water while the hydrant is being testing. The hydrants are known for throwing debris and rocks out at times and driving through it may potentially damage your vehicle.

As you will notice while driving the streets of El Dorado, different hydrants are painted different colors. This is a coloring system so that the firefighters will know approximately how much water they will be able to get from that hydrant.

While conducting a test, if the flow of the hydrant is different than the color indicates, it will be noted and the hydrant will be painted accordingly.