Several firefighters were honored in a Badge Pinning Ceremony at a City Commission meeting in September recognizing their promotion. They were:

Captain Shane McCoy, who was promoted earlier this year. Shane began his career with the department in June 2007. Shane then worked his way through the ranks to his current position. He is responsible for building maintenance, small tool repair, hydrant testing, assisting with department inventory, and Virtual and monthly training. Shane received the department unit citation in 2009 for his role in water rescue incident and a unit citation for his part during the operation at a structure fire and fire fatality earlier this year. Captain McCoy was pinned by his wife, Chelsea McCoy.

Lt. Zach Floyd was promoted this year to his current position. Zach has over eight years of experience in the fire service, beginning as a volunteer with the department in 2014. He is a graduate of the Butler Community College Fire Science program in 2015 and started his full-time position with the department in 2017. Zach's responsibilities with the department include Fire Investigation (in the process of certifying), assisting with building maintenance and janitorial inventory, overseeing hose testing, and assisting with SCBA maintenance. Zach received a unit citation for operation during a structure fire and fire fatality this year. He says his two proudest moments with the department were the unit citation and his promotion to Master Firefighter. Lt. Floyd was pinned this evening by his mother, Shari Floyd.

Adam (AJ) Hinnen began his career with the department in April 2019. Since then, AJ has taken on responsibilities to include overseeing the volunteer division, assisting with department training, assisting with vehicle and equipment maintenance, and assisting with pump testing and essential training. AJ received a unit citation this year for operations during a structure fire and fire fatality and a meritorious service award for his work with the Volunteer Division. Master Firefighter Hinnen was pinned by his wife, Summer Hinnen.

One pinning was for a promotion done back in the height of the COVID pandemic, so this recognition could not be completed. Lt. Derick Boggs recognized his rise in 2020. Derick started his career in 2006 and worked his way up to his current position as Lieutenant. Derick's current responsibilities with the department include fire investigation, certification as an Advanced EMT, daycare inspections, and medical inventory. Derick received a department unit citation for operation during a water rescue in 2009 and a life-saving department award for action he completed during a childbirth call with complications in 2013. Derick also received a letter of commendation for his effort to promote child safety regarding "Hot Cars." Derick credits the support of his wife and kids for his success. He was pinned by his wife, Diane Boggs. 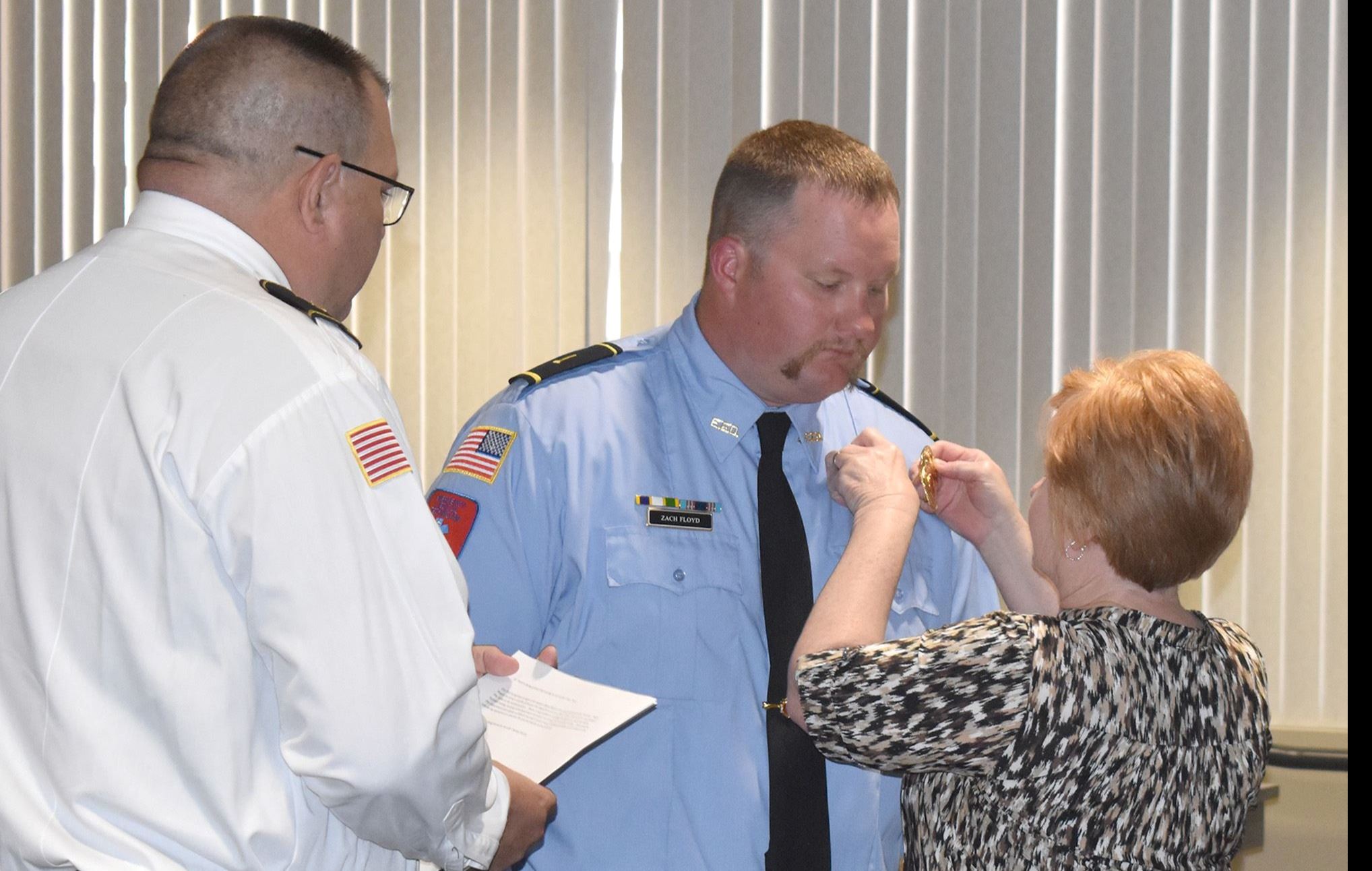 We are continually working on our skills through ongoing training in the department. Recently we were practicing Advancing the Hose Line to allow for easy entry into a building in the case of a fire. Check out this video from our training. We appreciate all of the hard work and dedication of our firefighters to provide the best service they can to our residents.

We were happy to join other emergency services in the county for Government Day on Nov. 16. We talked to a number of students from throughout the county about the services provided by the fire department, as students learned about various emergency services and government functions. The event is sponsored by Butler County, the American Legion and Legion Auxiliary.

We visited area elementary schools during the week of October 4 through 8 to talk about fire safety with the students.

Students learned about smoke detectors, having an escape plan in case of a fire, calling 9-1-1, and more.

In addition to the schools, we visited Bradford Memorial Library on Friday to read to the kids during Story Time, as well as show them the fire truck.