Find the Stadium Saturday Registration Form under "Entry Forms" on this page.

Fact #1:
Settlers began arriving in the area in the 1850s and trading posts were established along the Walnut River. El Dorado was platted in 1868 and incorporated September 12, 1871. Following the Civil War, El Dorado established itself as the county seat and grew to a city of nearly 3,500 by 1900.

Fact #3:
In 1912, El Dorado had the first woman bailiff in Kansas and the United States, Eva Rider. Mrs. Rider assembled the first women’s jury of Kansas, which was composed entirely of El Dorado women and served in the District Court of Butler County in November 1912. It was a dispute over real estate valuation that a male jury failed to resolve a year earlier. It was said no jury ever showed keener appreciation of its responsibility. The women were praised for their unusual attention to the evidence.

Fact #4:
Oil and gas exploration existed in Kansas prior to 1900. In the 1910s, the Wichita Natural Gas Company became a major player in Butler County. El Dorado grew from 3,000 to over 10,000 within three years after the Stapleton discovery. As oil was discovered in Butler County, the U.S. entered WWI in 1917. WWI accelerated the process of oil production. The El Dorado oilfield produced 29-36 million barrels a day, equating to 64% of Kansas output and up to 9% of the national output.

(Facts #1-4 came from the Rural Crossroads presentation on El Dorado by Butler County Historical Society Home of the Kansas Oil Museum. Visit their YouTube page to see the complete presentation)

Fact #5
While the pronunciation of El Dorado is often questioned by those from out of town, even the spelling of the city’s name was in question in the early days. When the Walnut Valley Times began, the editor adopted the spelling of Eldorado, which became the common use, but with a change in management at the newspaper, it was changed to El Dorado, causing considerable discussion. A letter from Captain J. Cracklin, who was among those who started the town, offered a solution. “Dear Sir: - In reply to yours of the 7th inst., I would say the name El Dorado is two Spanish words, and signifies 'The golden land.' The beautiful appearance of the country upon our arrival at the Walnut, suggested the name, and I exclaimed, 'El Dorado,' and when the town site was selected, the name was unanimously adopted. I proposed the name and Mr. Thomas Cordis seconded it. Yours very truly, J. Cracklin." (From genealogytrails.com)

El Dorado was platted by B. Frank Gordy and his associates in March, 1868, but the community continued as a settlement until 1870 when 51 petitioners, headed by D. M. Bronson, asked that the town be incorporated as a village. The Butler County probate court granted a 140-acre tract of land and the first trustees were J.C. Lambdin, A.D. Knowlton, T.B. Murdock, T.B. Boswell and C.M. Foulks. Shortly after Gordy filed his claim, Gordy sold 1/5 interest each to Henry Martin, Samuel Langdon and Bryon O. Carr. The lots were then laid out and sold. Humble homes were erected quickly and the town soon flourished. The citizens took pride in their property, and the area was known for the numerous shade trees along the streets. It was mentioned that, “El Dorado is one of the neatest towns in the state”. In 1871, D.M. Bronson headed and presented a petition for incorporation and on September 12, 1871, El Dorado was changed from a village to be incorporated as a city of the third class.

Read the complete story in the city's September 2020 Newsletter.

The Conner Cabin unofficially served Butler County as the first courthouse, and El Dorado as one of the first post offices. According to history, the cabin was built by a gentleman named William Hildebrand who was the first settler to arrive in El Dorado in May of 1857. He built his cabin on the site of the original town of El Dorado, which was located 1.5 miles southwest of what is presently the intersection of Main and Central. The community leaders would assemble at the Conner Cabin for meetings and other legal issues. Records were created and kept there because there was no public building at the time. This is how the Conner Cabin came to be known as the County Courthouse. Read more in the city's August 2020 Newsletter.

In 1915, about 3,000 people called the community of El Dorado home. The El Dorado Oil Field was the first to be found using science and geologic mapping. Within three years, the field was responsible for 12.8 percent of the national oil production. The Stapleton No. 1 well produced 95 barrels a day from 600 feet before being deepened to 2,500 feet to produce 110 barrels of oil a day from the Wilcox sands. To house its workers, Empire Gas & Fuel Company built Oil Hill northwest of El Dorado, housing 8,000 residents. It was called the largest “company town” in the world.

The courthouse was enlarged twice in the late 1800’s to accommodate the growing needs of the county. In 1875, a wing was added and a jail. In 1895, another wing was added. In May 1907, residents petitioned for a new courthouse and the County Commissioners approved the local appeal. Work began in 1908 and the corner stone was laid on December 3. Construction was completed in 1909. The major source of funding came from the Kafir Corn Carnival which was an annual event held in El Dorado. The Kafir Corn Carnival was so successful that it often drew in excess of 20,000 people to the downtown area of El Dorado. Learn more about the courthouse history.

El Dorado's first hospital was established in 1914, by Dr. Frenn L. Preston. In 1919, Dr. Preston enlarged the hospital to 50 beds by building a four-story facility, now known as the Smith building. The hospital was sold in 1921, to the Episcopal Diocese of Kansas and became known as St. Luke's. St. Luke's School of Nursing was in operation from 1922 through 1933. By the late 1920's the need for a modern hospital was recognized by local businessman Frank Allen and others. Mr. Allen contributed the land, which was where his mother's house sat, and $100,000 to construct a hospital to be named Susan B. Allen Memorial Hospital in honor of his mother. Read more in the city's January 2021 Newsletter.

With the discovery of oil in 1915, the city’s population soared and there was an urgent need for a new larger and modern depot. In 1918, the current El Dorado Missouri Pacific Depot was completed. Over the years it served the Missouri Pacific Railroad, carrying passengers and freight. The depot was often a center of many memories as men and women departed from this depot on their way to one of two World Wars. For many soldiers, it was the last view they had of El Dorado and for those returning it was the first view they had of home, often greeted by large crowds of family and friends. One of the most famous passengers to arrive at the depot was President Theodore Roosevelt. Learn more about the history of the Train Depot.

The bell at the northeast corner of Central and Vine originates from the original El Dorado Fire Station. After the City of El Dorado was incorporated in 1871, two months later, two fire wardens were appointed. In 1880, the city purchased a hand pump and in 1886 established its first real fire department. In 1907, the department acquired its first fire wagon. Prior to that, it had used two wheel carts, and later dray teams. Now the City is home to two fire stations, consisting of 17 full-time members, up to 20 volunteers and an average of 10 students. Read more in the city's November 2020 Newsletter. 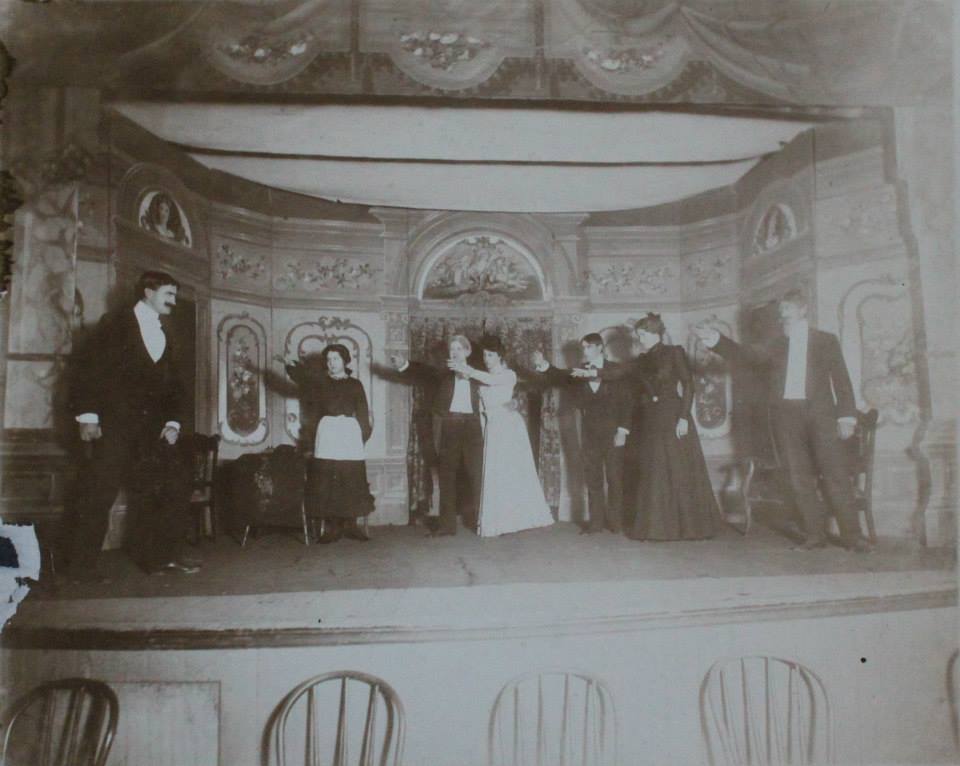 After years of citizens’ requests for a building to house meetings, church services, speakers, musicals and dramas, Alfred Ellet constructed the Ellet Opera House in the 100 block of West Central. The grand opening was in December of 1884. The first floor was occupied by a “Carriage repository” and clothing store. By 1899, the west half had been converted to a newspaper office and post office. The businesses on the first floor changed often, ranging from a pool hall to millinery to a hardware store. It was renovated in 2014 and now houses apartments and commercial space. Read more in the city's October 2020 Newsletter.

On March 11, 1897, the El Dorado Free Library was established on the second floor of the city building with a $75 annual allowance from the city fathers. The library was open two hours a day, three days a week. On December 2, 1912, as a result of a $10,000 grant from Andrew Carnegie, the first public library building opened its doors. In June, 1957, Mrs. Ruth Bradford, a library trustee, donated $200,000 for the erection of a new public library building as a memorial to her husband, Robert Bradford II. In December of 1996, renovation was completed, which added space and a new parking lot on the east side of the building. Learn more the history of the library.

The El Dorado Arms Hotel was completed in 1921. The $500,000 project was financed in part with $150,000 in stock, purchased by 250 El Dorado citizens. It included a theater, designed by the Boller Brothers. Among the groups that met at the building were Rotary, Kiwanis, Lions and Chamber of Commerce. Among the dignitaries who visited the hotel was Vice President and Kansas native Charles Curtis, who came on the eve of the 1932 election. The building was remodeled after World War II. In 1966, the hotel was closed. It was purchased in 1969 for the purpose of converting it into apartments – but this took some time to come to fruition. Learn more about the El Dorado Arms Hotel. 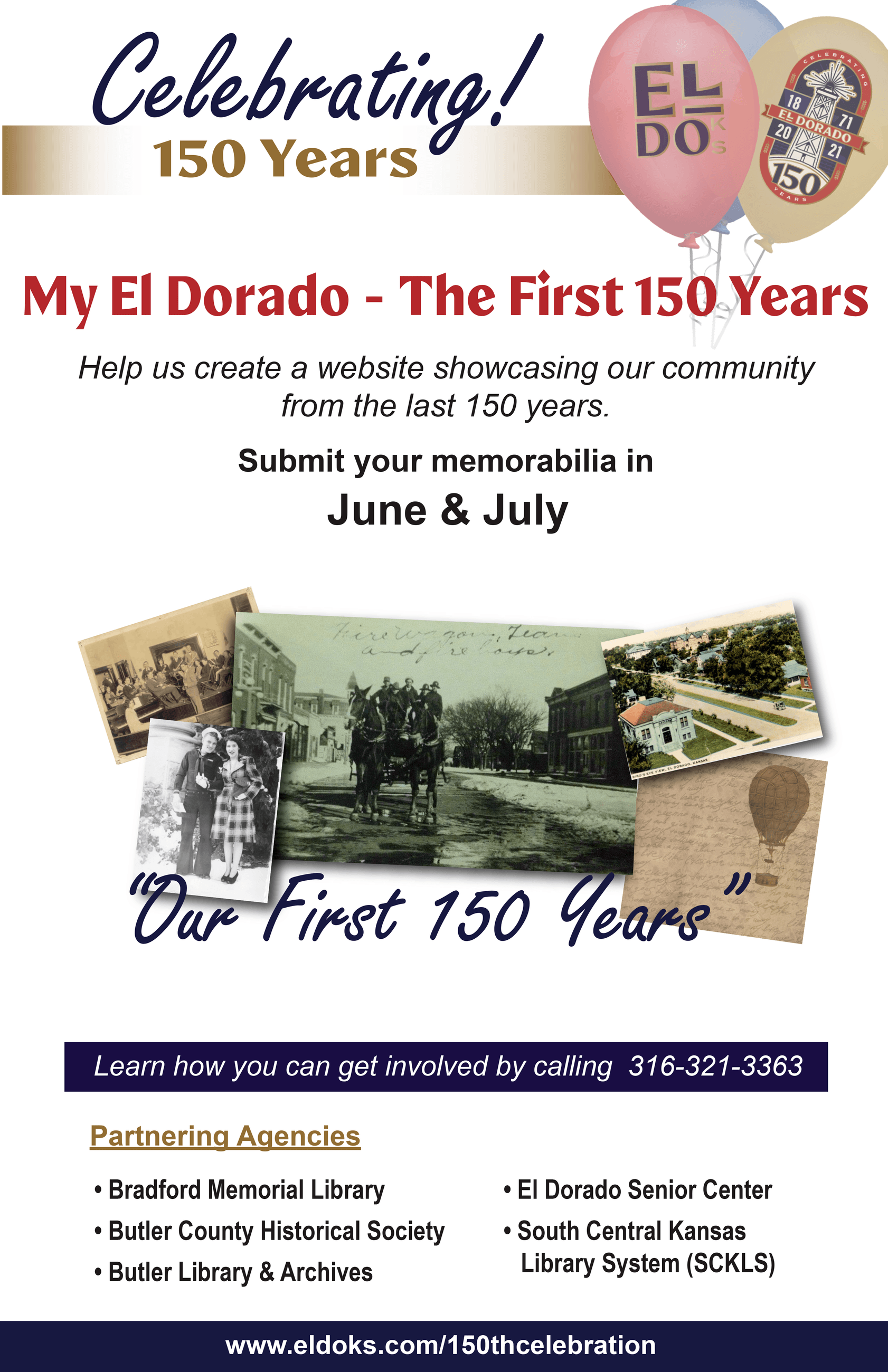 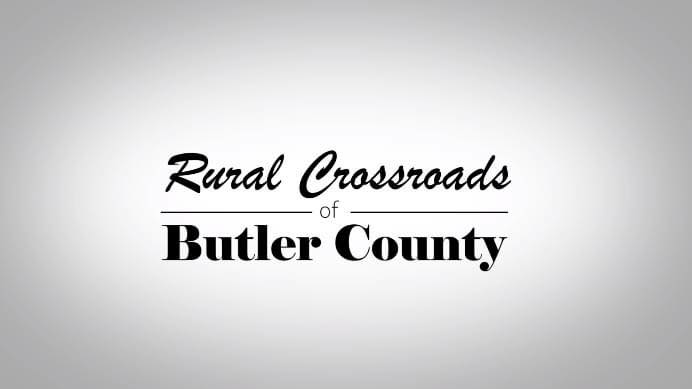 Watch the video on El Dorado from the Rural Crossroads series by the Butler County Historical Society.